Saturday, April 18, 2020
When you've binged watched on a little too much thriller and you're watching over your shoulder every time the door creaks its definitely  time to lighten the mood.  Romantic comedies are a light way to warm the heart with stories focusing on true love overcoming obstacles, with a chuckle or two along the way.  Who doesn't like falling in love, and romantic comedies give us that feeling, be it the levels of oxytocin rising as we connect on a deeper level with the characters or whether we're looking for that connection ourselves or maybe we just thrive on the feel good factor. 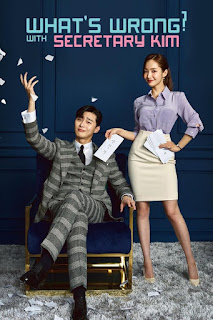 After nine years of working with her narcissistic boss, Secretary Kim Mi-soo (Park Min-young) decides to resign from making him look good as the Vice President of his family owned company. Having paid for her elder sisters education and her father's debts its time to move forward with her life and look for a husband.

Under threat of loosing the woman closest to him, Lee Yeong Joon (Park Seo-joon)  sets out to woo his secretary rather than loose her.  As he sets out to win over Secretary Kim, he's also hiding a secret which she is determined to uncover.   Will Yeong Joon's desperation to hold on to his secret and his self absorbed nature push his secretary in to the arms of his best selling author brother or can he convince her he truly loves her?

What I loved about this series was the fantastic chemistry between the two leads and how well rounded the supporting cast were.  Lee Tae-hwan plays the elder brother to Park Seo-joon with the right balance of malice and confidence to make you like him a little but not enough to take the shine of his brother.  While Kang Ki-young plays the effervescent best friend who's door is always open for this friends troubles while he suffers all the comedic prat falls the show can thrown at him. 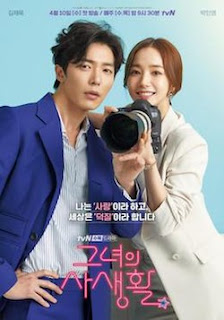 Park Min-young stars for the second time on my list as Sung Deok-mi a talented art curator at the Cheumn Museum of art.  While hiding her fangirl persona as popular fansite manger for Shi-an is my life, from her idol hating boss she constantly delivers while the Director takes all the credit until she steps down while under investigation for embezzlement.

When retired standoffish artist Ryan Gold who has been in New York comes to stand-in as the director he and Deok-mi don't hit it off.  When Deok-mi is mistaken for her idols new girlfriend, Gold suggests they pretend to be dating until things quiet down.  Keeping up the pretence in front of rival fangirl and fansite manager Sindy who has taken on an apprenticeship at the gallery.

Can they keep up the pretence long enough to run a successful show sponsored by the idol Shi-an protect Deok-mi's alter ego.

Park-Min-young shines as the as the confident curator who is stealthy as cat while stalking her idol.  With Kim Jae-wook as Ryan Gold they pull off their love hate relationship with loathing and adoration in equal measure.  Kim Bo-ra is cheeky and irritating in a cute way as idol fan Sindy.  There's enough laughs and romance to keep up curled up with tea and cake cheering them on until the sun goes down. 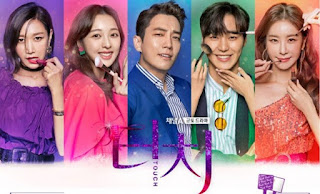 When Idol trainee Han Soo-Yeon (Kim Bo-ra) is in the final round of live auditions for a place in the girl group Miracle she has her makeup done by top artist Cha Jeong-hyeok head of Cha beauty.  When she asks him to tone down the look he's designed he's irate and prays she'll be eliminated from the group.  When by a twist of fate she is disqualified from the group and her dreams are left in tatters she disappears for a year coming back to interview for a job at Cha beauty.

Despite disliking her Jeong-hyeok gives her a trial with his team.  Her first client is her old trainee days friend and idol Kang Do-Jin (Lee Tae-hwan), her former agents top star.  While Do-jin is happy to have his friend back in his life Soo-Yeon is still reluctant to fully embrace connections with her past.  While preparing Do-Jin for make-up she uses the wrong toner causing Do-Jin to break out in an allergic reaction before a photoshoot for Cha Beauty's bid for an editorial front cover.  Due to her costly mistake she is fired by Cha Beauty.

Feeling guilty for her mistake she works with Do-jin to help him recover enough to complete the shoot, admiring her tenacity she is given a second chance at Cha beauty.  While Do-jin desperately tries to win over Soon-Yeon, she is developing a crush on her boss.

When Cha Beauty goes under and Jeong-Hyeok has to start over she stays by his side to help him rebuild as they both face ghosts from the past and decide what their future will hold.

There are some stand out characters in the supporting cast in this show, I love Hong Seok-Cheon as artist Kim Dong-min and Lee Tae-hwan plays the soft hearted and somewhat juvenile Do-jin supported by Lee Soo-ji as his long suffering manager. 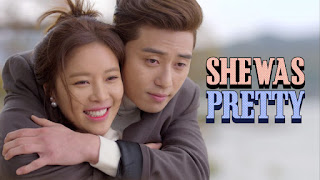 When Hye-jin's (Hwang Jung-eum) old school friend Sung-joon (Park Seo-joon) gets in touch and wants to meet Hye-jin is over the moon, however when he shows up looking unexpectedly handsome, her confidence in her appearance nose dives and she asks her roommate Ha-ri (Go Joon-he) to stand in for her.  Working as a temp for Moist magazine Hye-jin can't avoid Sung-joon when he joins as editor. At work Sung-joon constantly belittles and mistreats Hye-jin for her clumsy nature not recognising her as his old friend.

Finding friendship and support from brash colleague Shin-hyuk (Choi Si-won), Hye-jin throws herself in to her job, while her roommate continues to secretly meeting Seo-joon pretending to be her.  When Seo-joon sacks Hye-jin for someone else's mistake, he slowly starts to realise he has a connection with Hye-jin and that Ha-ri isn't the friend he remembers.

Hey-jin is fun a loveable, I like how she changes not to please someone but because she is ready to accept who she is and do what makes her feel confident.  The relationship between Eye-jin and Shin yuk is sweet and playful, in some scenes you are almost rooting for her to choose him.   This is a fun weekend watch with a mix of fairytale magic. 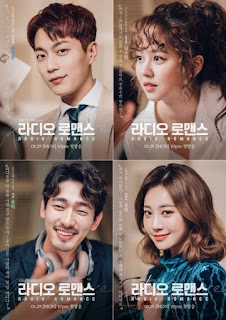 When their presenter leaves their radio show in bind and threatened with cancelation Song Geu-rim (Kim So-hyun) the shows assistant is tasked by returning producer Lee Kang (Yoon Park) to recruit actor Ji Soo-ho (Yoon Doo-joon) as their new presenter in order to secure a place as the shows main writer.

Ji Soo-ho a top actor with a perfect life is utterly dependent on a script and seems ill fitting for the radio.  He realised at an early age to succeed and plicate his mother he has to wear a mask of perfection to the outside world while feeling depressed and lonely at home.  When Geu-rim approaches him to do the show he is against the idea, but eventually agrees if Geu-rim will meet his conditions.

Finding a connection in their past they band together to face trouble head on and try to save the radio show together.

This is a likeable romance, the two main leads have their flaws but you are rooting for them to overcome their hardships and succeed.