It's Okay to not be Okay, started this past weekend on Netflix and TVN, produced by Studio Dragon, Story TV and Goldmedalist, it is a Romantic Drama a a whimsical fairy tale twist, staring Kim Soo Hyun in his first TV drama since returning from military service and Seo Ye Ji of Lawless Lawyer. 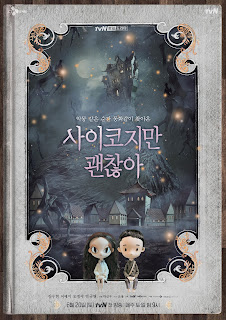 I love how the animation isn't dark which makes some of its darker themes all the more impactful.
It also sets up Ko Moon-young as a character beautifully, mixing her reality with that of the characters she creates in her books. 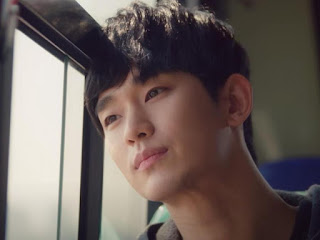 Moon Kang-Tae (Kim Soo Hyun) is the primary carer for his older brother Moon Sang-Tae (Oh Jung Se).  He works as a carer and has part time jobs to support their family and is at the forefront of caring for his brother, understanding and managing his mood swings, his whole life and his every choice revolve around caring for his brother.

Being a carer is not an easy task, it can be draining, hard and unpredictable. While there are good moments, just like when Kang-Tae gives his brother a Dinosaur book and is warmed by how happy it makes him, there are hardships and so far its being shown in balance here which I find other drama's sometimes lack weighing too heavily on the negative or the positive in turn.  Kang-Tae is just as wounded as his brother and needs care and support which initially he appears to get from his friend Jo Jae Soo (Kang Ki-Doong).

I'm interested to see how they progress the balance and healing the wounds that Kang-Tae has, my heart breaks every time he asks his brother whom he loves more and doesn't get the reply he yearns to hear. 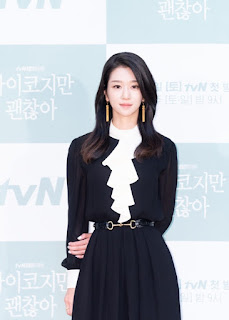 I first came across this impressive actress in 2018's Lawless Lawyer opposite Lee Joon Gi and Choi Min So, two heavyweights I really admire.  She was impressive in how she held her own.  In 'It's Okay' she's really getting a chance to shine as a strong female lead.  She's powerful and confident and calls it like she is.  I love the book signing scene in Episode 2.  I'm really invested in seeing where her character arc takes her. 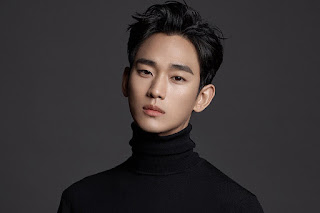 I really have a soft spot for Kim Soo Hyun as an actor.  He can play the dark a disturbing characters as in 'Real' and flip to soft loveable characters like Don Min Joon in 'My Love from the Stars'.  I love his work with Jun Ji Hyun in both 'My Love from the Stars' and 'Thieves' and wondered how his chemistry would be in this, but I think this will be a pairing that really works.   So far I'm impressed with his return and feel he made a great choice in this project. So far he's capturing the strength, loneliness and weariness of his character with great empathy and understanding. 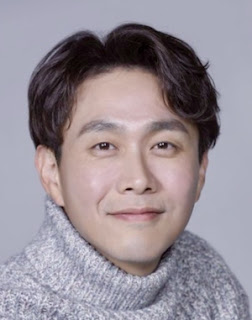 As Moon Sang-Tae, I've only recently come across Oh Jung Se while watching 'The Vampire Detective', but this role couldn't be more different and challenging.  Playing  Sang-Tae the elder brother  who has Autism Spectrum Disorder, he manages to convey the condition with warmth and depth.  I particularly love the musical like scene as he walks/dances towards the book signing in Episode 2 giving up a peak inside his mind and how when he's excited bright and cheerful the world can be.  He also brings depth in scenes when Sang-Tae is trying to figure out how to look cool which makes your heart break for him.

While it would be easy to get wrapped up an focus on the darker elements of the story, mixing with elements of whimsey such as the scene where Ko Moon-young becomes the fifty foot woman and tries to pluck Kang-Tae from the street because she wants him, or when the signs come to life for Sang-Tae as he runs joyously towards the book store. I'm curious to what effects and imagery they will come up with in the next episode. 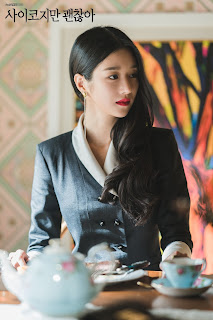 I have closet envy!  The outfits chosen for Ko Moon-young, are perfect, they mix the eccentric, almost gothic style with a designer flair which fit the character perfectly.  Her clothing is bold and powerful but still feminine.  She looks as if you could pluck her out of 'It's okay' and put her in a film like Edward Scissor hands and she would be a perfect fit.  As Moon-young tells a young fan "In all my fairy tales the witch is always the one that's pretty" and the carful crafted style fits this perfectly - how could you not want to be a Pretty Witch!


8. Something hiding in the darkness 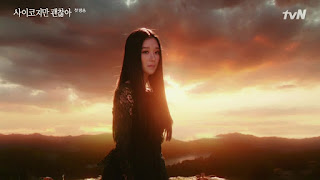 There's a darker back story just waiting to seep through the pages - we have already had hits of the darkness in the past of all three main characters.  There's definitely more to the relationship between Ko Moon-young and her father, who or what are the butterflies that terrorised Sang-tae and what really happened to their mother?  Also what really happened to the father in Episode one and how is that going to ensnare our leads?


9. Story within a story
I love how the stories in Ko Moon-young's books tie in to the live action, linking and bleeding through the story. The books are almost a character in themselves, binding the main leads in both the real word and the book world as they hint at elements of back story and personality traits.  I could see a definite spin off in books from this series which would do well.


10. That next episode anticipation
A sign of a really good show to me, is when I'm walking that tight rope of bouncing up and down like an excited five year old waiting for the next episode and wanting to extend that anticipation because I don't want it to end.  It's that pit of your stomach excitement that drags you to the couch finger poised dying to press play and I know that's where I'll be sitting come this weekend...