Sunday, April 23, 2017
People say it's like waiting for a bus, you wait ages for one then two come together.

This week I had two fantastic evenings entertainment.

The first was a trip to the theatre to see All or Nothing, the musical based on the 1960's Mod band the Small faces.

A friend gifted me the tickets and I'm glad she did it was a brilliant show.  It reminded me in its structure of Buddy, the Buddy Holly Story.  It follows the rise and fall of the band and then deals with the tragedy of the lead singer Steve Marriott.   The show starts with the infamous performance at New Years when Marriott sensationally quit the band, the narrator an older Steve Marriott then takes the audience back to the beginning when the band met.

With live performances of the bands greatest hits including the title song All or Nothing, Itchycoo Park and She La La La Lee, the audience is taken along for the roller coaster ride that was the bands life.

The ending leaves you with a lump in your throat as the Narrator the older Steve and his mother discuss his death.  Tragically Marriott died in a house fire in 1991 before the band invites the audience to join them in singing the bands greatest hits and celebrating the talent they shared with the world.

I would highly recommend if you get the chance checking out this show.  The live performances are brilliant and the acting sublime.  You don't have to be a fan of the Mod era of music to enjoy this show, give it a go. 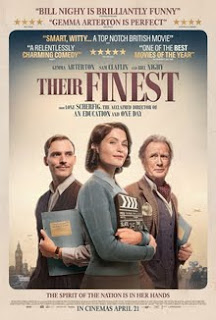 My second evening of entertainment was my more regular jaunt to the cinema.  Movie night was a screening of Their Finest, based on the novel Their Finest Hour and a Half by Lissa Evans.  It's the story of the Ministry of Information during World War II whose role was to moral boosting films.  Enter Welsh secretary Catrin Cole (Gemma Arteton) who had ended up writing some cartoons for the paper after the copyrighters are called up.

Working with writer Tom Buckley (Sam Clafin, Catrin is there to write 'the slop' or the female perspective.  They set about creating a film from a story of two girls who assisted in the rescue of Dunkirk.

This is the type of drama British Cinema does best.  It's beautifully structured, the actors are perfect in their roles and walk a fine line of sadness /happiness perfectly.

This is an amazingly beautiful moving film, if you get the opportunity put this top of your to see list.