Sunday, July 17, 2016
I love theatre, have done all my life.  There's something so intense and intimate about sitting so close to the performance, embraced by it but on the periphery not an intimate part but a part of the collective with an impact on the performance.

It's not always possible to get to the theatre to see the performance you want, I don't live in London so travelling there to see a show is not always possible.  So when I heard that National Theatre were doing a live feed of Kenneth Branagh's Romeo and Juliet I ensured I got my tickets quick smart.

Not only do I love seeing Shakespeare performed - that's what it was written for after all, but I'm a fan of Kenneth Branagh.  I loved and studied his Henry V and have enjoyed his work throughout my child hood and more recently in films like The Boat that Rocked.


The cast for this production is also a major draw;

Juliet
Lilly James has been growing as an actress and wowing audiences since playing Lady Rose in Downton Abbey.  As I'm working on my latest novel "The Poppy Garden", she is also the person I have in mind to play the character of Sky.  She has an amazing way of capturing the energy, vitality and nervous excitement and playing characters with open honesty.

Romeo
Richard Madden played a star turn in Game of Thrones and has gone from strength to strength in his latest endeavours.  He is a perfect choice in this role as he can play the hero - having just played Price Charming taking on another literally heart throb could still have been a stretch.  Madden played a touching Romeo, you and energetic driven by passion and tormented by his youthful indiscretions.

Mercutio
Derek Jacobi play an Orson Welles inspired Hangdog man about town.  An elder statesman who inspires the youth he surrounds himself with while the inspire him and remind him of his youth.  With fun, vigour and good humour Jacobi commands the stage

Nurse
Meera Syal creaking bones and all bares witness in a bawdy comedy manner to the star crossed lovers plight, and her heartbreak is truly felt and hits the chord with the audience. 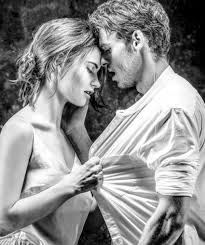 At the beginning of the live feed, Kenneth Branagh explained his vision, setting the scene of a 1950's La Dolce Vita and that in cinema the production would be shown in black and white to enhance this feeling.  I must admit, the B&W did enhance the feel but I think I would also like to see it in colour to compare the two.

Derek Jacobi steels each scene he's in, delivering his lines and sauntering across the stage cane in hand.  He doesn't feel out of place with his younger band of pals but it did make his death scene feel a little more hollow than in other productions I have seen.

Madden and James play off each other well and they play lovers with youthful exuberance that matches their former Cinderella matching.  I would love to see these two play Darcy and Elizabeth in a Pride and Prejudice adaptation.

James performance is youthful and beautiful, her innocent belief in her true love while feeling the wrath of her father was expertly directed to be the right level of uncomfortable.