Time for a Spot of Tea

Sunday, April 24, 2016
I love tea, I'm English, I swear it's something written in to our genes.  I have always loved tea - I don't remember the first time I ever had a cup of tea I just know its something I've drank all my life.

I come from a family of tea drinkers and everyone of us takes it slightly differently, even my tea tastes have changed over the years.

When I was young I took my tea with whole milk and one sugar.  I don't know why I just always did. I drank tea four times a day, one with Breakfast, one with lunch, one after dinner and then one at supper.


Tea was a big part of family life, I remember in the summer sitting in my Grandparents garden with a china plate with a special spot for your tea cup to sit eating cucumber sandwiches made with cucumbers my grandad had grown. 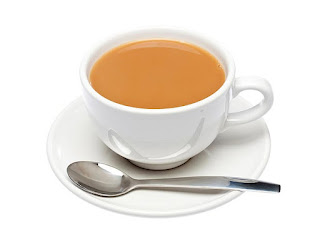 You drank tea when you were happy and you were comforted by it when you were sad.  You shared it with your family and your friends.  Be it leaf or bag, mug or cup, tea pot or tea spoon it brought everyone together.

My mam and dad took their tea the same way I did or vice versa.
My Nan would drink tea with a slice of lemon or just with a dash of milk
My Grandad took tea with Milk and one sugar
My brother just added milk

I moved to the USA, for my second year of Uni and had to adjust my tea drinking as tea in the US is vastly different from tea in the UK.  I remember my first morning in the hotel after arriving late evening the day before, ordering a cup of tea with my breakfast to be presented with a cup of hot water and a choice of several flavours of tea form cinnamon and honey to wild berry.  I looked at the waiter blankly and asked if they had English breakfast tea which he duly went of to find returning with it and a little tub of honey which he explained was the way they had been told we drank it in the UK.  I remember the confused look on his face when I went to the breakfast bar with all the cereals to steal the milk.

Luckily I had a stash of tea bags in my suitcase and my parents would send me a relief package every month.  My only concession was to drink a powdered drink of cinnamon and apple which he tried to convince me was better than tea.  Needless to say that was a battle he never won.

My habits pretty much stayed the same until my late twenties when I developed a health problem where I had to eliminate as much diary and fat from my diet for a period of time as I could.  So the full fat milk I loved in my tea was replaced by a dash of semi-skimmed milk.

Once I recovered I stuck with Semi-skimmed milk, around then it was believed it was better for you than fully fat milk and I wanted to be healthy, maybe I should have told my sweet tooth that too but that's another story.

Now I'm in my thirties my tastes have changed and I've made conscious changes again in the quest for a healthy lifestyle, following a couple of medical issues.  I cut out sugar from my tea - this didn't happen over night it took me around six months.  I switched to fruit sugar initially as it has a low GI and then slowly reduced the amount I took over time until I was using nothing at all.

The amount of tea I drink has also changed, when I started working in the Fire Service it became obvious the Fire Service runs on tea from the number of cups my bosses and colleagues drink.  One of my bosses who's now retired drank so much tea I did consider moving his office in to the kitchen to make it easier.  In the end I resorted to finding him the biggest mug in the world so I could drink one cup to his three.   I do try to cut down on my tea in the summer months and switch to water and home made cordial or warm water and fresh lemon but there's still a minimum of three cups of tea a day.

I recently moved on to taking Manuka Honey (Queen Bee) with my tea, I take a quarter of a teaspoon approximately in a cup  as this type of honey has antibacterial and antibiotic properties.   I did try initially taking mauka honey as a supplement, a teaspoon twice a day but it's quite an acquired taste so I looked for another way to include it in my diet and this has been the way that works for me.


I also switched back to full fat organic milk in order to keep up my calcium levels.   I've read a few of the debates on organic vs non-organic food/drinks and in some cases I find the switch is worth it.

My best friend is an advocate of Earl Grey tea, when we go to the movies we end up in Starbucks and the order is always a Venti English Breakfast for me and a Venti Early Grey for her.  She continues to try and convince me Earl Grey is the way forward but despite my efforts I can drink Earl Grey as easily as I drink Yorkshire tea!

As my job calls for me to attend meetings and rush around a little, the above friend treated me as part of my Christmas Present to a Starbucks Travel Mug, which goes with me everywhere.  I love it, it keeps my tea warm so even if I'm called away from my desk my delectable drink is still nice and warm waiting for me on my return!

My brother recently started drinking Green-tea and despite all the articles and advice telling how good it is for you health wise I just can't find a green tea I can drink.  Maybe it's about perseverance and I just haven't tried for long enough.

I am trying to be more adventurous with my tea and venture in to more varieties and tastes, but as with cutting out sugar it's takes time and finding the right brand with the right flavours for me.

If anyone has any suggestions on some good teas to try let me know in the comments below....