Friday, April 22, 2016
I love movies, I mean I really love movies from the script to screen I love everything about the process and the final outcome.  I studied media at university and concentrated on the history of film and theatre.

I've always loved movies ever since I can remember, I would spend my weekends watching old hollywood movies staring Bing Crosby, Danny Kayne, Frank Sinatra and Doris Day with my Grandparents.  I would watch 80's blockbusters with my family, horror films with my mam, and  teen slasher flicks with my brother.   I always had my favourites films I would watch over and over again and I think it's partly my love of films which influence the way I write.

When I write I see movies in my mind, I have the actors picked out the locations, the camera shots the whole deal and I think it's because I grew up watching some of the most amazing movies of our time.

I took a little walk down memory lane this week, I was in the mood for something good, something that would remind me why I loved movies.  So I decided to watch Jaws.  Okay that might sound a bit odd but bare with me. 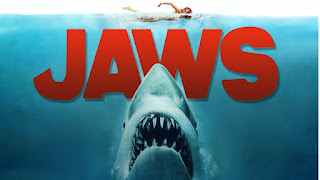 Saturday nights were a great movie night when I was a child and I remember watching Jaws and my brother literally levitating off the floor at the under water fishing boat scene, (If you've seen Jaws you'll know what I mean, if you haven't YouTube it.)  Not only did this film have a physical response it had a very deep emotional one, how many people are afraid of sharks because of that movie, or recite that theme tune when walking in the surf?

Jaws may look a little dated now in terms of the fashion but the story still has impact.  It's been years since I sat and watched it in it's entirety but I still jumped at all the right places, I still felt that same heart racing panic when the Duh duh of the music started.

Jaws is special, each part of the film works together to lead you down a track it wants you to go, it's a rollercoaster ride with so many highs and dramatic drops that you're breathless by the end.  It has shreds of truth the history of the USS Indianapolis shark attack and it works with your deep seated fears of what you can't see.

To me the thing that makes the movie great is that you don't need to see the shark to fear it.  In the first scene where the young girl runs in to the ocean, you know something it up, you know the water moving the way it does is foreboding, you know the moment she is nudged and pulled that she's a goner and you know it's something frightening thats doing it but you never actually see it.

When the latest blockbuster is being made theres always a challenge in the process most of which now are solvable by the technology we have.  I can go to the movies now and watch kids be amazed at the special effects achieved with a computer, look at Star Wars, The Avengers etc.  But Jaws didn't have that, Jaws had primal fear, you don't see the reveal until three quarters of the way through the movie and when you do its on a joke, which has become part of our culture.


The thing with Jaws the story is as relevant now as it was then.  The local politicians wanting to keep the story quiet, the family new to the area wanting to fit in and live a specific lifestyle, a fear of the unknown.    Somethings never change, they just alter a little with each new generation.

There are so many films I grew up with that give me that adrenaline rush and the movie stays with me, I wonder is that the same now for someone growing up with all the technical advances we have seen?  Will they remember the films as lovingly as I remember the movies of my childhood?

Who can say, but what I can say is I wanted to be reminded why I love movies and I was.....