Monday, October 26, 2015
It’s almost Halloween, it’s the time of year the nights draw in, the cosy jumpers work their way back in to your closet and it’s time for those films that make the hairs on the back of your neck stand on end.  The films that make you look over your shoulder and wonder if someone is lurking in the shadows.   So with all the feelings of what the coming darkness brings I ventured out to see the well hyped Crimson Peak. 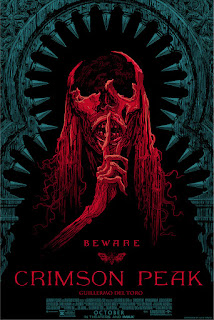 How could it go wrong?

A perfect movie for Halloween if you believe the trailer, ghosts, creaking old mansions, red blood like clay, a harrowed heroine and elegant but sinister leading man.  Unfortunately, that was were the tension and expectation peaked.

Initially I thought Del-Toro was on to a winter, a haunted house piece with a great cast and from the initial images and trailers an impressive set.   However, within the first ten minutes the film went downhill rapidly until it crashed and burned to an obvious end.

The story follows Edith Cushing, even the name illicit old horror majesty, who has seen ghosts ever since the death of her mother who returns to warn her “Beware of Crimson Peak”.  Edith grows into an independently minded young woman who writes Ghost stories and is determined to be published.    While utilising the typewriter at her Father’s office she meeting the Aristocratic Sir Thomas Sharpe, who is traveling with his sister searching for investors in his clay mine at the family home in England which produces blood coloured clay.

Edith is in ignorance of the affection of child hood friend and a suitor Doctor Alan McMichael.  Approved of by her father, Doctor Alan McMichael shares her ghostly interests while his family    While she shuns her father and Alan’s encouragement to attend a ball hosted by Alan’s expectant social climbing mother, it takes a few words from Sir Thomas to whip her in to a beautiful gown and Cinderella like lead her through the dance with envious eligible socialites watching on.
seem less enamoured with Edith, and frown upon her creating her a social outcast.

A brief courtship follows but wise old dad has the wherewithal to employ a private investigator to unearth the dark secrets of Sir Thomas’s past.  With part of the mystery revealed Carter Cushing demands the withdrawal of Thomas and his sister from their society, sending them on their way with a generous cheque to ensure their speedy departure.

Following the generic route of such a haunted house story, Carter Cushing is disposed of under suspicious circumstances and Edith marries Thomas in haste and rushes off with him to England, where his none to welcoming sister lies in wait.

Allerdale Hall, the home of the Sharpe’s is beyond dilapidated with a huge hole in the ceiling above the entrance hall and the foundations sinking in to the sodden red clay.  For a horror writer this should be Edith’s dream home, even if it is a tad cold, but that really doesn’t seem to be a concern to the residents.

Now back to their isolated home with few servants to wait on them, Thomas and Lucille revert to their prior exploits while Edith settles in to her new home with its rattling pipes, whooshing winds and resident ghosts and random dog which appears out of nowhere to be adopted as a companion by the new lady of the house.

I had high expectations of the ghosts and while the effects that created them showed great potential their use in the story was weak.  The ghosts themselves are simple pointers in the story a means to an end which neither scare nor add tension to the story.

Mia Wasikowska was impressive as the independent Edith initially but her character seemed to be a little washed out by the end.  While Tom Hiddleston seemed rather too tired to give the character any depth or feeling, Charlie Hunnan showed great potential but simply didn’t have the screen time to capitalise which Jessica Chastain played her part well as her character rots and decays in time with her home.

I really wanted to like this film, I wanted it to be one of those horrors that stays with you and terrifies you, but it was less haunting more like a damp fire work on bonfire night which fizzles out instead of explodes with grandeur.