Monday, October 26, 2015
I love London, I love theatre land, unfortunately I don’t get there as often as I would like, which is why I love the National Theatre’s live streaming of some truly remarkable performances.

The Barbican’s current run of Hamlet staring Benedict Cumberbatch was the latest offering, which I was glad to see knowing I wouldn’t otherwise get the opportunity to see the performance.
The Barbican is a grade two listed building, from architects Chamberlin, Powell and Bon as part of the regeneration of London’s bombed landscape.  It opened in 1982 and is Europe’s largest multi arts and conference venues. 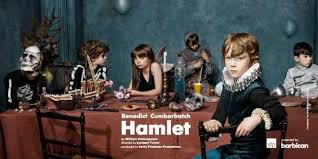 Hamlet played by Benedict Cumberbatch is grieving for the loss of his father and is enraged by the marriage of his mother to his uncle.  As war looms outside the gates of their castle the family and it’s subjects start to tear themselves apart.

Visited by the ghostly visage of his father, Hamlet swears to avenge his murder, with the wit of his well-known Sherlock character and filled with energy and emotion Cumberbatch thrills as the title character who plays both plotter and mad man with reverence and magnificence seldom seen in previous portrayals.

Sian Brooke gives a moving portrayal of Ophelia demented by madness and Ciaran Hinds is villainous as Hamlet’s uncle.

Visually the set is stunning and mix of contemporary and classic styles fold together beautifully.

This is by far the best adaptation of this great work I have seen.