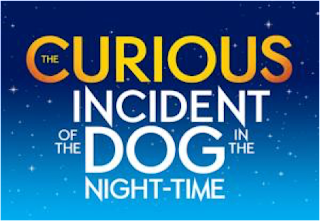 Now, firstly I must admit when Mark Haddon’s novel “The Curious Incident of the Dog in the Night time” was released I wasn’t really aware of it.  I saw it in a few books stores but it never really caught my fancy.   Then I heard it was being adapted into a play for the West End and I read a bit more about it.  After seeing a documentary on the production and hearing there was to be a UK tour I decided this was something I’d love to see.  So, over twelve months ago I booked tickets for the opening night at the Sunderland Empire and well I wasn’t disappointed.

Late one night Christopher (Joshua Jenkins) finds his neighbour’s dog dead in the garden, speared with a garden fork.  After being found with Wellington (the dog) he has a run in with a police officer who doesn’t understand Christopher doesn’t like to be touched. He is taken to the police station where his dad, Ed (Stuart Laing) comes to collect him.   Christopher decides at this point to investigate Wellington’s murder even though his dad tells him not to. 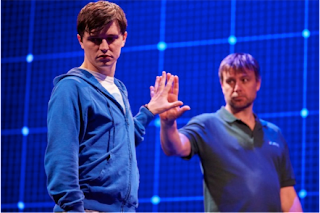 Described as a Mathematician with behavioural difficulties there are allusions to Asperger’s or Autism in the way Christopher behaves and reacts to the world around him.  Told through the book he writes for his teacher Siobhan, whose aim is to help him understand society and the world around him, the story follows Christopher as he investigates Wellington’s death.

Christopher has to overcome his limitations and face his fears throughout the story;

Investigating Wellington’s death uncovers some other family truths Christopher wasn’t aware of and leads him to London, accompanied by his pet rat Toby.

This touring production put on a magical experience for all in attendance.  The whole cast deserves praise for their performances, but I must say Joshua Jenkins was absolutely amazing.  He managed to convey Christopher’s emotionless logical way in an empathetic and utterly believable manner; it’s an emotion full performance of someone who is not comfortable with emotions.

The stage, lighting and props were brilliant and played fantastically in to the story and really created the sense of seeing the world the way Christopher does.

Since starting this article I have now seen the show for a second time and again was impressed by the depth, emotion and commitment the cast show.

If you can go and see this tour you won’t regret it - TourDates.